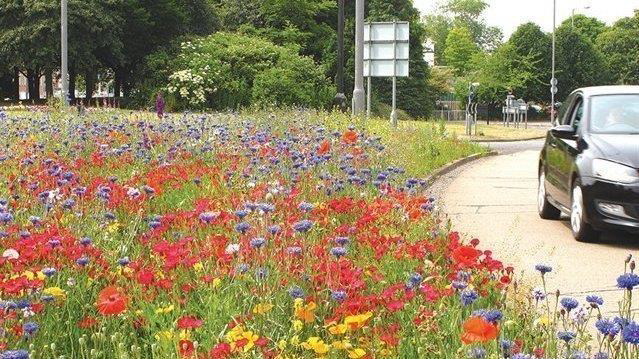 A new report by Raunds Town Council shows that a number of residents have contacted the council to suggest that Raunds should have Wildflower Verges.

A similar mix of flowers is actually used at Hunstanton off the A149 but as the photo below shows, well back from the Roadside

The advice given appears to indicate that any planting could only be carried out on a wide area of verge since it would be unable to be mowed until September and any growth near the road, could impede visibility of signs, pedestrians and other obstacles.

This would mean that the wildflowers could not be planted directly next to the road itself.

It was highlighted that it may specifically be difficult in areas within the 30mph limits, where obstacles are more frequently observed.

The correspondence suggests that planting may be possible on the wide sections of verge along London Road backing onto Warth Park. Also a wide area on the opposite of London Road near Marshalls Road and again near Cherry Walk.

One of the key concerns also included reference of the mowing schedules and the varying responsibilities for this (Highways vs East Northamptonshire Council vs Private Land Owners vs Town Council) and the fact that this would have to be fully agreed with parties, depending on where the seeds were spread.

Not to mention the consideration that residents may complain ‘that it looks tatty, overgrown or weedy’ and even go out and mow the flowers themselves in protest.

On top of this, it was highlighted that planting normally needs a license, although since it is only seeding, a license may not be required.

Finally it was suggested that it may be easier to plant seeds on Town Council owned areas rather than the Highway Verge.

The topic will be discussed at the upcoming Environment and Leisure Committee in the Council Chamber on Tuesday 17th September, 7:30pm

Let us know your thoughts in the comments