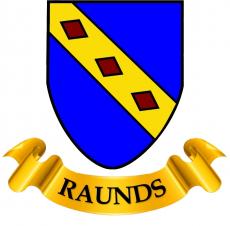 “We attended the annual dinner, along with Cllrs L Wilkes and Helen Howell. It was held in the Miller in Wellingborough. The Twinning Association continues to grow in membership, and Raunds is beginning to grow in prominence, although Higham is still the senior partner “

“This Burns supper in aid of the Stroke Association was held in Jester’s Bistro. Forty-eight guests attended, and the raffle was organised by the Ecuador students from Manor School. Jester’s laid on a sumptuous meal and everyone seemed to enjoy themselves. £700 was raised for the mayor’s charity, and the Ecuador group raised a further £150.”

“We attended a short commemoration of the Holocaust in Kettering’s council chamber. The service was presided over by the Mayor of Kettering’s chaplain. Candles were lit in remembrance not only of the Holocaust, but also of more recent genocidal events in Rwanda and Yemen. “

I led a team from Raunds, which included Cllrs Wilkes, Howell and Beattie, in a quiz organised by the Mayor of St Ives in support of his charities. Of 19
teams, we came 4th, only 3 point behind the winners.
Must do better next time…

All activities apart from the Quiz Night were joined by the Mayoress, Mrs Magdalena Levell