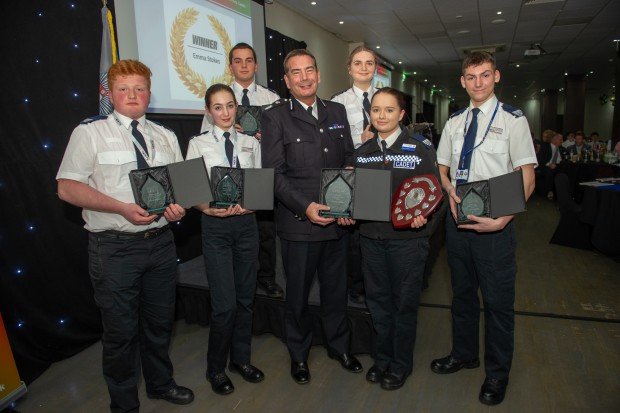 An awards evening for the Northamptonshire Emergency Services Cadets (NESC) saw a number of young people commended for their work including a girl who assisted a man in cardiac arrest and a boy who delivered bread and milk to the elderly during heavy snow.

During the evening, a number of awards were presented to both cadets and their leaders. Amongst the winners was Patrick McMillian who was named as Cadet of the Year for Kingswood for working the most voluntary hours in 2018. On one occasion, Patrick joined Corby’s Neighbourhood Policing Team in delivering bread and milk to elderly residents in Corby during heavy snow.

Another of the winners was Cadet of the year for Towcester – Megan Baker, who assisted a man who suffered a cardiac arrest at a public event. Deputy Chief Constable – Rachel Swann was also recognised by the Cadets who presented her with an award for services to the young people of Northamptonshire.

Chief Cadet Officer, Julie Mead, said: “There is so much fantastic work happening in Northamptonshire at the hands of young people, a group of people often misrepresented in the media.

“Awards evenings are brilliant opportunities to recognise that work and to thank the cadets for everything they do throughout the year in helping keep the people of Northamptonshire safe.”