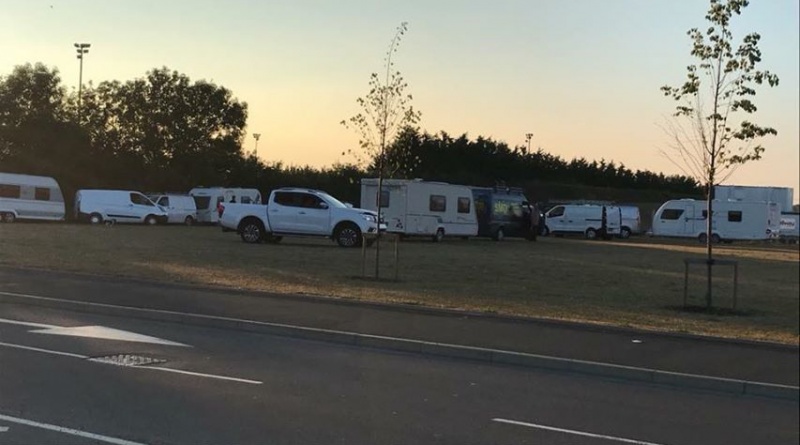 An unauthorised traveller encampment has been setup on a grassy area by the Brick Kiln Way traffic lights in Raunds.

Northamptonshire Police have issued a statement indicating that the land owners have hired a private company to serve an eviction order and the travellers have been given until 20:00 today (Mon 23rd July) to vacate the land.

Various unconfirmed reports have also been received to Raunds Town Voice stating that people have been canvassing the town and especially older members of the community.  Canvassers have offered to provide services for drives, gutters and gardening.  There has been allegations that people have been put under pressure with extremely high rates being charged.

The canvassers have allegedly been observed to have a number of different business cards depending on what type of work they believe the person to be in need of. One unconfirmed message to the site stated that a vehicle was traced back to the land on the Bellway site at Brick Kiln Way and that the issue had been reported to the police.  No police statement has yet been provided.

One member of the community stated:

My 81 year old dad has just been well and truly ripped off by this lot!!!! Cannot believe the gall of them! Preying on the old and vulnerable – police aware

Welcome to the town hope you all have a nice stay!

Police are urging the public to remember to respect all community groups, especially over Social Media discussions.