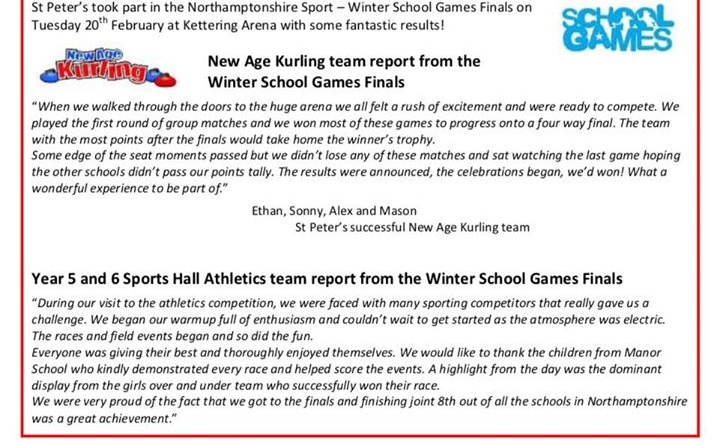 “When we walked through the doors to the huge arena we all felt a rush of excitement and were ready to compete. We played the first round of group matches and we won most of these games to progress onto a four way final. The team with the most points after the finals would take home the winner’s trophy. Some edge of the seat moments passed but we didn’t lose any of these matches and sat watching the last game hoping the other schools didn’t pass our points tally. The results were announced, the celebrations began, we’d won! What a wonderful experience to be part of”

“During our visit to the athletics competition, we were faced with many sporting competitors that really gave us a challenge. We began our warmup full of enthusiasm and couldn’t wait to get started as the atmosphere was electric. The races and field events began and so did the fun.

Everyone was giving their best and thoroughly enjoyed themselves. We would like to thank the children from Manor School who kindly demonstrated every race and helped score the events. A highlight from the day was the dominant display from the girls over and under team who successfully won their race.

We were very proud of the fact that we got to the finals and finishing joint 8th out of all the schools in Northamptonshire was a great achievement.”