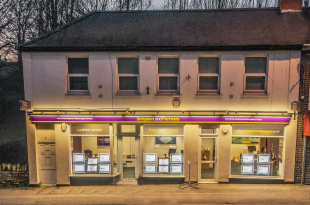 A local estate agent and its director have been ordered to pay more than £2,500 in fines and costs for illegally advertising its business in Raunds.

Simpson and Partners Ltd were found guilty of illegal advertising on lampposts along Andrews Way in Raunds when they appeared at Northampton Magistrates on Tuesday, 19 September.

Despite previous warnings about displaying unauthorised signs, Andrew Simpson, director of Simpsons and Partners Ltd, pleaded guilty to flyposting on behalf of the firm. They were fined £1,500 and were ordered to pay costs of £1,080 and a victim surcharge of £120 meaning that the prosecution was achieved at no cost to the taxpayer of East Northamptonshire.

Paul Bland, Head of Planning Services, says: “An investigation, following a complaint from a member of the public, confirmed that this company had broken the law by illegally advertising its business. Enforcement officers had spoken with representatives of the business on a previous occasion to explain the laws and consequences of flyposting but these warnings had been ignored and so we pursued a prosecution.”

Leader of East Northamptonshire Council, Steven North, adds: “The guilty verdict and the decisive fine of £2,500 should send a very clear message to anyone considering displaying an advertisement in East Northants without consent – we will not hesitate to act against fly posters, whose activities cause such a blight to the district.”

Unlawful advertising is an offence under S.224 Town and Country Planning Act 1990.