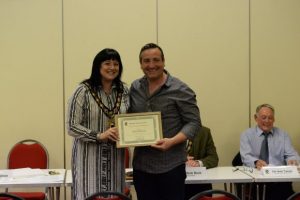 At this years Mayor’s Civic Service, Cllr Helen Howell gave out several Citizens Award to local residents that had been nominated for their hard work and contribution to the community.

Most nominees received their awards at the Civic Service on 12th March but unfortunately one nominee, local actor Michael Nardone, was unable to attend the service to collect his award.

At this year’s Annual Town Assembly Cllr Howell was honoured to invite Michael along and presented him with his award in thanks for his time, dedication and performance at the Mayor’s fundraising events.