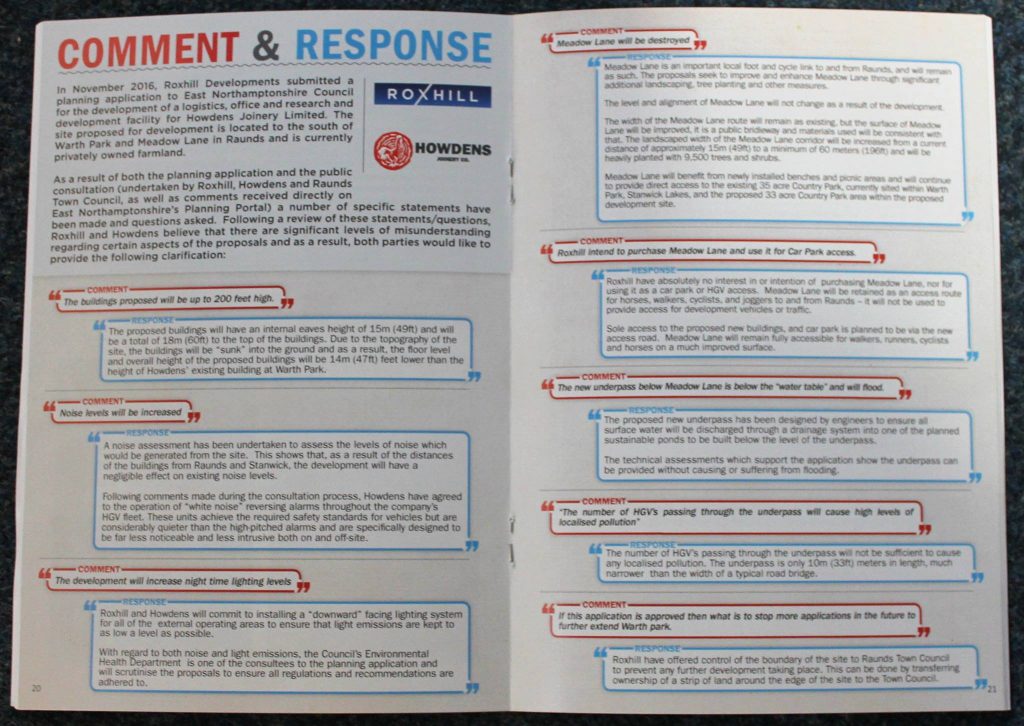 Geoff Dyne from the Warth Park Opposition Group (WPOG) would like to share a response to the information provided by the ‘Raunds Roundup’ publication (Issue 20, Feb 2017):

“A four page advertisement in Raunds Roundup by Roxhill and Howdens Published as issue 20 February 2017 is an attempt to hoodwink the people of Raunds and Stanwick.

The editorial on page 6 states that the “opposition group declined to comment”. It is true that we were approached but far from decline, we did not respond. We were not made aware that there would be a 4 page advertisement by Howdens and Roxhill but had already decided long ago to not comment in Raunds Roundup. It was clear they were being paid to carry advertising for the developers and as such there would be a conflict of interest for the publication. WPOG members have however made their objections known through the proper channels to East Northants District Council ahead of the planning hearing. The objections are available for all to see ref number 16/02119/FUL.

It is by no means clear that the Raunds Roundup 4 pages dedicated to Howdens & Roxhill is an advertisement. It is not an editorial piece and so is a breach of the Advertising Standards Authority’s Code of Practice.

The comments with Red quotation marks are not attributed other than to suggest they came from either the public consultation or ENDC planning portal. This is very vague and should have been made clearer so the quotations could be challenged appropriately. However, we have had a look at some of the points raised.

Statement Made: “Buildings proposed will be up to 200 feet high”

So far as we can find no one has suggested this. Furthermore a simple look at the plans would demonstrate the height of the buildings proposed.

Statement Made: “Noise Levels with be increased”

“A noise assessment has been undertaken to assess the levels of noise which would be generated from the site. This shows that, as a result of the distances of the buildings from Raunds and Stanwick, the development will have a negligible effect on existing noise levels.
Following comments made during the consultation process, Howdens have agreed to the operation of “white noise” reversing alarms throughout the company’s HGV fleet. These units achieve the required safety standards for vehicles but are considerably quieter than the high-pitched alarms and are specifically designed to be far less noticeable and less intrusive both on and off-site.”

“The noise assessment has been disputed as it reaches erroneous conclusions not based on fact. The use of White noise reversing alarms has not been put in the planning application. There is no mention of fork lift trucks or other vehicles visiting the site.”

Statement Made: “The development will increase night time lighting levels”

“Roxhill and Howdens will commit to installing a “downward” facing lighting system for all of the external operating areas to ensure that light emissions are kept to as low a level as possible. With regard to both noise and light emissions, the Council’s Environmental Health Department is one of the consultees to the planning application and will scrutinise the proposals to ensure all regulations and recommendations are adhered to”

“The comment reflects fact. Even with the latest lighting and with compliance to regulations, the night time light levels will increase. Claims about light pollution entirely lack credibility. Roxhill / Howden’s own application pictures already demonstrate that the so-called downward lighting they use creates a massive sky glare visible from several miles away. The advert suggests that it is the responsibility of the Council’s Environmental Health Department to ensure that regulations are adhered to. This is factually incorrect. It is the advertisers’ responsibility to comply with regulations. As well as the overall increased glare, there will be increased light pollution from HGV movements during antisocial hours, particularly at times when people whose houses overlook the site will be trying to sleep. This highly relevant information is excluded from the advert.”

Statement Made: “Meadow Lane will be destroyed”

“Meadow Lane is an important local foot and cycle link to and from Raunds, and will remain as such. The proposals seek to improve and enhance Meadow Lane through significant additional landscaping, tree

“Meadow Lane is an important local foot and cycle link to and from Raunds, and will remain as such. The proposals seek to improve and enhance Meadow Lane through significant additional landscaping, tree planting and other measures.

The level and alignment of Meadow Lane will not change as a result of the development.

“It is absolutely true that Meadow Lane would be destroyed by this proposal. It is an ancient right of way bordered by long established hedgerow which is habitat to a range of birdlife, which would be destroyed by the proposed work. Howdens / Roxhill claim that it is sufficient to avoid changing the level and alignment, totally ignoring that the rural and historical characteristics of this ancient bridleway. The characteristics of the way go far beyond these purely geometric factors. Howdens / Roxhill fail to state what ‘improvement’ they propose to the surface. They fail to state what, if anything, is wrong with the work recently carried out by ENDC and funded by the taxpayer.

Howdens / Roxhill claims about having created a country park are entirely untrue. In using that term they are being particularly dishonest, given that country parks are, under the Countryside Act 1968, defined as statutorily declared and managed by local authorities in England and Wales. The area claimed by the advertisers as country park does not appear on the definitive list of country parks as updated on 2/2/17.”

Statement Made: “Howdens will not be creating any new jobs, they will just be transferring jobs from their existing site in Brackmills Northampton”

“Howdens currently employ approximately 300 staff at Brackmills, many of whom (exact number to be confirmed post consultation with staff) will relocate to the existing building recently completed at Warth Park. If this current operation is approved, employee numbers will increase to 500/600 with a further additional 100 plus jobs at seasonal peaks. Therefore, even if a large proportion of the existing Howdens staff were to relocate, the proposed development will provide a considerable number of new job opportunities.

Howdens anticipate that many of these new jobs, in addition to warehouse and support roles, will be professional and managerial in order to create the proposed “Centre of Excellence” that Howdens plan at Warth Park. Jobs created will include, finance, appliance after sales, human resources, research and development, purchasing, quality assurance and additional professional support services. Additionally, the proposed facility will also provide job opportunities for graduate placements, internships as well as apprenticeships. This mix of jobs would exceed the ambitions of the emerging Neighbourhood Plan which seeks to ensure that 20% of jobs within distribution buildings are ‘office based’.

By way of example, in order to house these additional professional staff, the proposed office accommodation included in the planning application will provide up to 8 times more office floor space than is currently provided in the existing Howdens’ facility. This would in itself, be one of the largest office facilities in East Northamptonshire”

“We know where this quotation came from, HOWDENS.  It was said by Howdens representatives at the public consultation.

Statement Made: “The proposal will create up to 793 additional HGC movements daily”

“The Transport Assessment submitted as part of this planning application assumes an industry wide ‘worst case’ scenerio for traffic to and from the site. This worst-case is based on standard data for similar sizes of buildings and types of employment activity rather than on Howdens’ specific data.

However, in practice, Howdens’ operations will not generate these levels of HGC traffic. In face, based on their current operation at Brackmills Industrial Estate in Northampton, Howdens expect the number of daily HGV figures to be less than half of the 793 vehicle movements identified in the Transport Assessment even allowing for Howdens’ growth in the future.

At Howdens’ other major facilities in the UK, the company have created an action management team that meets with local residents on a quarterly basis. If the proposed development were to be approved, Howdens will immediately initiate this company policy in Raunds to ensure they are doing all they can to create and maintain a good working relationship with the local community.

“This [statement] has come directly from the development application. Howdens / Roxhill now describe this as “Worst Case Scenario” Perhaps this reflects if they are working to capacity or not. Given that the site proposal includes 287 lorry parking spaces. Even a single occupation of those spaces would amount to 574 lorry movements. These are their figures, not anything to do with WPOG.”

Roxhill / Howdens would do well to look at the risk to Stanwick from wind that would be funneled along the valley which has already caused damage to property without the addition of new high sided buildings to exacerbate the situation creating a risk to life and to property.
Roxhill should also look at the concerns of The Flood And Water Management Team. Raunds is very vulnerable to flooding and to date WPOG have not seen evidence that satisfies those concerns.

The list could go on just with the things published in Raunds Round up but I think it is clear that Roxhill / Howdens are over simplifying things and are trying to deceive people in to thinking that the development is good for the environment, job opportunities and an addition to the countryside that people can enjoy.

WPOG disagrees, if allowed it will be yet another polluting blot on the landscape that if allowed will never go away. We don’t believe much of what Roxhill and Howdens claim and have demonstrated before that they are economic with the truth, their reports are faulty and they have lied to ENDC. 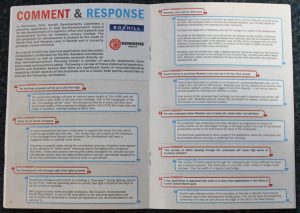 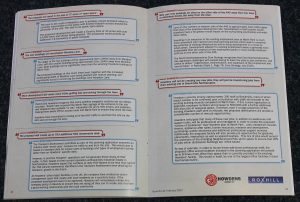 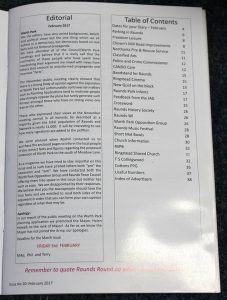 Photo Courtesy of Graham Hanson / Stop Warth Park Facebook Page who comments:  “Light pollution from the current units. Double this if phase III goes ahead. Look how dark the town itself is and imagine how dark it used to be before Warth Park. We’ll never get that back now, but we can try to prevent them doubling it. Photo taken from top of Amos Lawrence playing field. ” 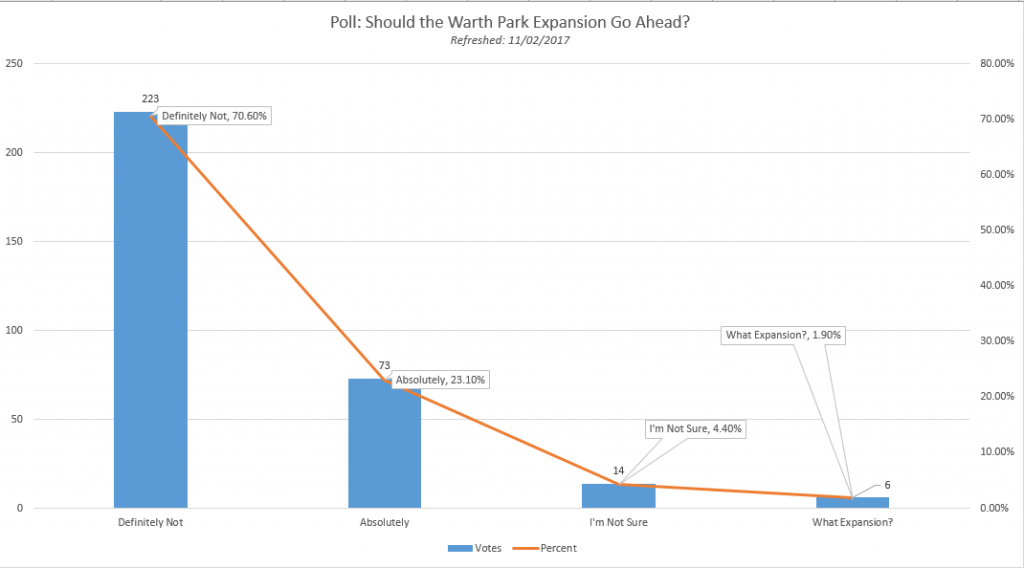